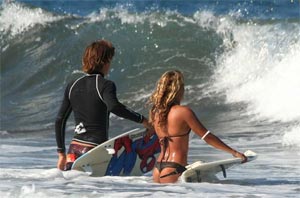 Long before Costa Rica was marked on the map as a popular tourist destination, surfers were well aware of the treasures of this Central American country.

Surf in Costa Rica is one of the best experiences a passionate surfer can have: great waves and fantastic atmosphere. Everything is unique and exceptional natural environment. The Best time to surf in Costa Rica

Unlike Hawaii or Australia, Costa Rica does not have huge waves but has consistent waves during any season. The rainy season is during the summer and the following months, so the best time to travel to Costa Rica is generally from December to April. During this time is when the beaches of Costa Rica are crowded of vacationers looking for sandy beaches and relatively calm sea. However during the rainy season is when the weather is choppier, and there are greater chances of finding good waves and less crowded beaches. Depending on what you want and on your skills on the  board, you can decide what is the best time for you for surfing in Costa Rica: if you’re good and daring, best travel Costa Rica in the rainy season, if you’re rookie or prefer something quieter then surf in Costa Rica from December to April. Both coasts offer great surf spots, but the Nicoya Peninsula, on the North Pacific Coast of Costa Rica, is a surfing mecca, and Montezuma has become a legend for both beginners and experienced surfers, although the bank of shallow sand where beginners are used to surf is a bit out of town.

During nights of reggae, all the people go to Chicos, which is the only real bar in Montezuma. The party goes on late into the night and surfers, locals, hippies, and tourists lay down on the beach around spring up campfires and people showing their acrobatic skills. Most hostels and hotels in Montezuma are beachfront, and there is hammock mounted between palm trees just a few steps from the door and the beach. Many surfers also head to Malpais, a few miles away to attend the legendary “full moon party” and to find fewer people as well as better and more daring waves. Real adventure lovers should head to Pavones, at the southern tip of the Osa Peninsula, a few kilometers from the border with Panama, but bear in mind that is not easily accessible, as it can be reached just driving several hours on unpaved roads. And during the rainy season is almost an impossible journey. The quiet and unexplored town of Pavones has the second longest left wave in the world, and this is an epic ride of which you never tire. The wave breaks in larger waves, so (unlike other areas) from April to September is the best time to surf here. There are several outdoor restaurants where toucans may occasionally stop to “refuel” and a handful of bars including the exclusive La Manta, where surfers rest in hammocks and watch surf videos on the big screen above the bar after a long day of surfing. Apart of surf, there is not much to do here: walk around the beach or see some sublime sunsets. Sometimes you can walk for hours without seeing a soul and is relaxing to know that there are still places like Pavones. Playa Hermosa (Hermosa Beach) is known as one of the beaches with the most consistent waves in the world (more than 150 days a year), so if you want to be sure that you will ride a wave, you have to spend a few days in this beautiful beach near the town of Jaco. Playa Hermosa was chosen to host the World Surfing Championship 2009. It is located just 5 minutes by walk from Jaco and only a half hour drive from San José, the capital of Costa Rica. The beach is about 8 km long, and the whole beach is ideal for surfing in Costa Rica, although caution should be used because it has strong currents and waves, coming from right to left. This surfing beach is the easiest to reach if you are traveling to Costa Rica from abroad since it is the closest to the main airport and it is here where you can find more accommodation possibilities and leisure after a long day of surfing. In fact, there are many hotels in Jaco of excellent quality, although a little more expensive than the other beaches. These 3 beaches are the best or at least among the best surf beaches of Costa Rica, but there are much more great beaches. Here you can discover all the beaches to surf in Costa Rica: costa-rica-surf.com