The best of Carnival of Barranquilla 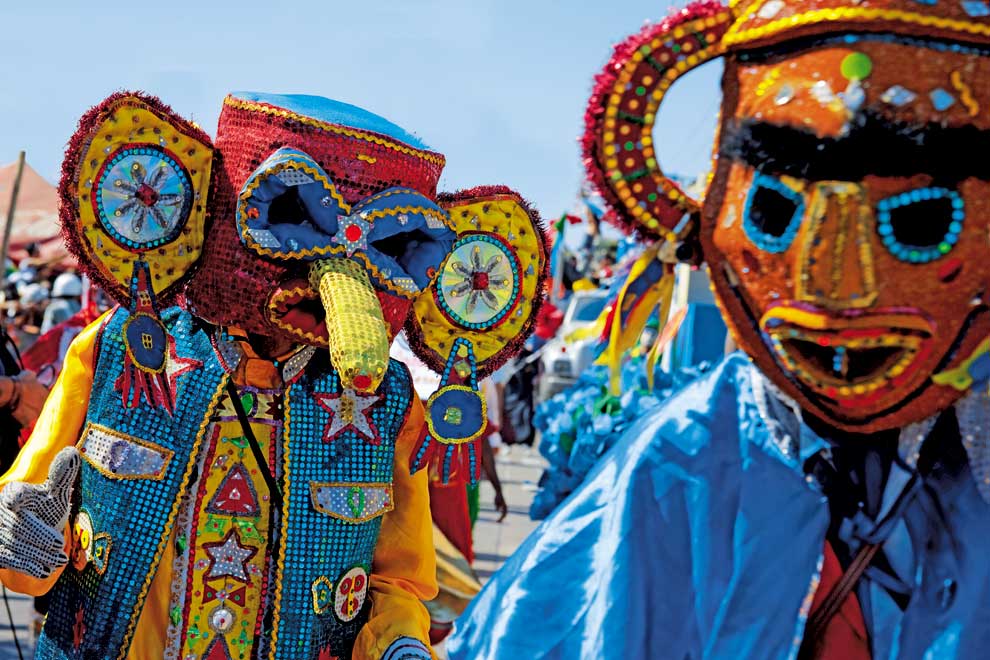 Fatima is a content marketer who loves travel and has a passion for exploring different cultures.

The Carnival of Barranquilla is certainly an event to be lived at least once in life. It is one of the happiest festivals in the world and one that gets the entire population involved in its preparation. The Carnival is celebrated in the streets of Barranquilla, the country’s fourth-largest city and the main economic centre of the Colombian Caribbean coast.

Colombians feel this carnival as their own thanks to their Caribbean climate. All of them work almost full time preparing the costumes and the floats; the whole city is decorated, all of them dressed up and the festive atmosphere inundates the whole city: no neighbourhood is excluded.

And this is what characterizes Barranquilla’s Carnival, a festival that makes the true spirit of Colombia shine. The Carnival of Barranquilla, whose origin is uncertain, represents and regroups all the symbols and the cultural diversity of the country: on the one hand, the European, in the core of the festivities; on the other one, the African, clearly visible in the colourful dresses and masks. Finally, you can see the Indian origins, the element of union and tradition.

The origins of the Carnival of Barranquilla

The Colombian Carnival is one of the largest in the world, only topped by the Carnival of Rio. The UNESCO has also declared it Oral and Intangible Heritage of the Humanity.

The Carnival of Barranquilla originated in the nineteenth century following the celebrations for the abolition of slavery for African slaves: people began dancing wildly in the streets for days. In the following years, traditional Spanish parties were added to the ones by the Indian and Creole peoples.

The Carnival has always been able to gather all social classes by mixing dance food and drink with collective entertainment. Besides, the Miss Barranquilla pageant is also celebrated, also known as the choice of the “Queen of Carnival”. There are also parades and dances in the streets and the theatres.

Carnival of Barranquilla’s days of celebration

The Carnival of Barranquilla starts always on a Saturday and ends on a Tuesday. This way, during the first day of the festival, they celebrate the Battle of the Flowers, and the Great Parade can then be held on Sunday and Monday.

In the Great Parade, hundreds of thousands of people march in the city’s streets following the rhythm of music, floats and dancers. It is a notable spectacle, colourful and noisy, a mass that looks like a single moving body.

Finally, on Tuesday, a sad procession cries in the Joselito funeral, a symbol of celebration and joy of living. But that is not a problem for Colombians; since Joselito will come back to life the following year.

It is a party preceded by months of intense choreography tests, of hours and hours invested by the dressmakers to create colourful and complicated costumes and restaurants with a full house.

There are two dances, cumbia and the dance of Garabato:

Cumbia is a fusion of Indian, African and Spanish traditions that imitates a couple’s courtship. It is characterized by elegant and sinuous movements that, in the case of the woman, concentrated in the hips, while the feet dance following the rhythm of the flute and the clarinet.

During the parades, while couples dance the cumbia, everything turns into a splash of traditional skirts with elaborated ruffles and meters of fabric.

The Dance of Garabato

The dance of Garabato symbolizes the victory of life over death: men dress as skeletons and carry a scythe, going in groups or individually. Other men and women dress in many colors, with costumes in the national colours: yellow, red and blue. So, the dance simulates a real battle between life and death.