Jerusalem, a city full of contrast 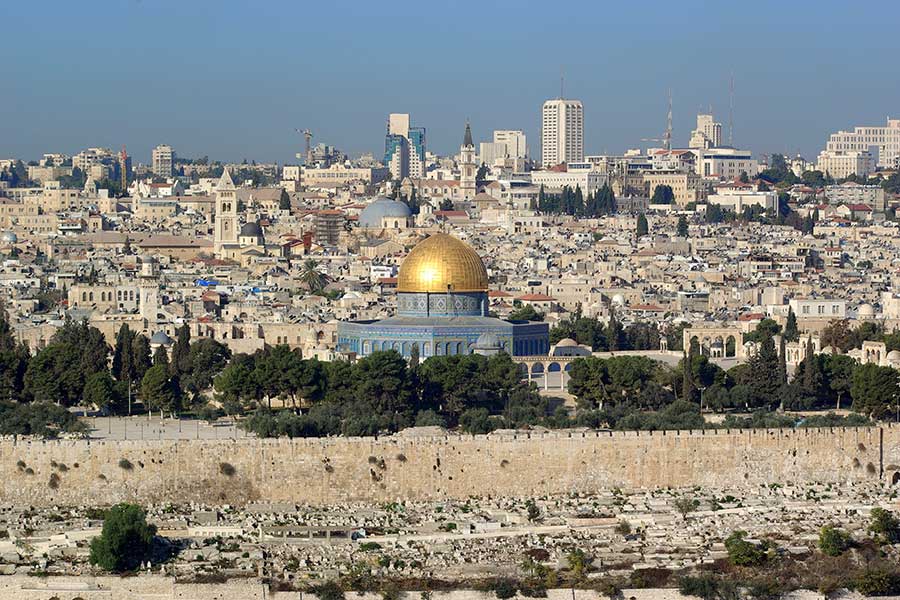 Few places in the world inspire quite as much passion as if you visit Jerusalem (Yerushalayim in Hebrew, Al-Quds in Arabic), revered as it is by three major religions. For Jews, the city has always been synonymous with their faith and ethnic identity and symbolises the rebirth of their ancient homeland. The Western Wall, at the foot of Temple Mount in the Old City, is Judaism’s most important place of prayer. For Muslims, the Dome of the Rock and Al Aqsa Mosque on Temple Mount are among Islam’s most important sites. For most Christians, the Church of the Holy Sepulchre covers the site where Jesus – after carrying the cross through the streets of the Old City along the Via Dolorosa – is believed to have been crucified and then resurrected. However, the 3000-year-old capital of Israel has known many periods of conflict and this unfortunately continues today. Indeed, the city’s legal status is itself the subject of much dispute and the city is not actually internationally recognized as Israel’s capital. Nevertheless, despite suffering serious terrorist atrocities, the city continues to expand, with several urban projects underway in west Jerusalem. West Jerusalem is the extensive Jewish part of the city, which includes the modern centre of the city, while the Arab district of east Jerusalem, which lies beside the walled Old City and adjoins the troubled West Bank, is much smaller. West Jerusalem can be seen as a tribute to Israel’s enterprise, energy and economic drive. It is characterised by wide, busy streets of modern architecture and appealing older pedestrianised areas lined with popular cafés. The full diversity of the Jewish population can be seen in its streets, shops, markets and malls, which makes for sharp cultural contrasts even within west Jerusalem. The important national monuments and major museums are located on the western side of the city. East Jerusalem, by contrast, is drab, run down and old-fashioned, although lively with haggling traders and crowds in Arab dress.

If you visit Jerusalem, you will find that a large proportion of the buildings, old or new, are constructed of the attractive local pale limestone. Yet contrary to appearance, both eastern and western sections of the city have sprung up within 100 years. Only the Old City, on Jerusalem’s eastern limits, is historic. For most residents, and indeed most Western visitors, the western section of Jerusalem is what they think of as Jerusalem, while the Old City serves merely as an evocative reminder of the city’s origins. The Old City is sharply divided, with separate Christian, Armenian, Jewish and Muslim quarters. The Muslim quarter is a labyrinth of narrow covered souks, while the Jewish quarter, rebuilt after being destroyed during the Jordanian occupation (1948-67), is a quiet residential area with important archaeological sites. The Old City preserves a phenomenal range of sights dating back to Roman times and beyond. Indeed, with the exception of the great museums on the western edge of town, most of Jerusalem’s main tourist sights are found here. And with its pleasant, temperate climate, warm in summer, cool in winter but dry almost all year round, Jerusalem lends itself to discovery on foot. Within a few paces, one may wander from the hustle and bustle of an Arab souk into the calm of an Armenian garden, before stepping into the awesome splendour of a medieval fortress or gazing at ruins of a Roman street. Jerusalem provides an opportunity to experience dizzying contrasts. Come to Israel and visit Jerusalem no other city demands or offers quite so much.