Karni Mata: where rats are venerated 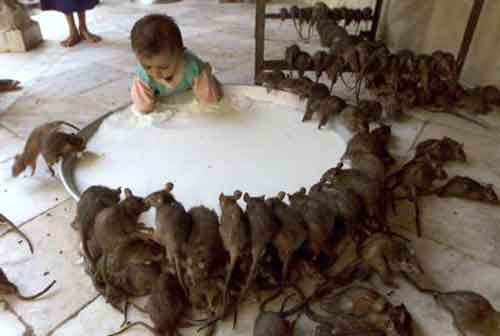 Once you enter here the show will be for strong hearts. Welcome to Karni Mata about thirty kilometers from Bikaner, in the northern part of the Rajasthan desert near the borders with Pakistan, where stands the temple of mice of Deshnok: a unique place in the world where rats are venerated. Thousands and thousands of mice fed by the believers worshiped as gods. It is required for the brave Westerners who want to enter the temple, put on socks and do not walk around with bare feet as they make the careless Indian devotees. Inside the temple the mice are scurrying between the walls of the temple and run fast between your legs. In the sacred crypt, where no believers have no access, mice climb on the shoulders and arms of devotees, who in return offer their delicious sweet dumplings. The same sweet sold for a few rupees on carts outside the temple. But the mice are also greedy of milk. It is poured into large containers and put them sorted on the edges and suck greedily. Once finished they give way to others mice.

In India, the country of the 33 million gods, any place of worship or temple hides a story and a ritual. Here the legend tells that once upon a time Karni Mata asked Yama, the God of death, to bring back to life a child, the son of a storyteller. The God replied that he could not, because the child had already reincarnated. Then Karni Mata was furious and declared that from now on every storyteller, after death, would live temporarily in a mouse before reincarnating, thus depriving Yama the God of these souls. So the local people built this temple to mice. Before entering the temple warn of two events that could occur. A bad one and a good one. Be careful not to step on or kill it by mistake one of the rats. For the devotees is a sign of great misfortune and your risk will be enormous: according to tradition, the minister of Karni Mata could ask the killer to pay the equivalent of the weight of the beast in gold. Totally opposite is the other event, the good one, it’s about the real purpose for which among Indians decide to travel to the temple, in a journey that can last many days (India is huge!). It is due to the very rare white mice, albinos, who are in the middle of thousands of dark. Who see one albinos rat, even for a few seconds, will attract the favor of God on him and his loved ones.

Do you need some luck? 🙂