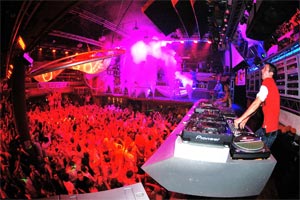 During years, Ibiza has been attracting millions of visitors for its popular nightlife. In summer the top producers and Djs in dance com the island and play in the various clubs, in between touring to other international destinations. Many of these Djs use Ibiza as an outlet for presenting new songs within the house, trance and techno as well as other musicians, artists and travelers that are drawn to the unique creative environment of Ibiza. See all about the top parties in Ibiza. Here is a brief explanation of the club scene and how it works: so after spending the day chilling at one of the amazing beach bars, watching the sunset while having a bite to eat and a drink, the clubs are calling you for a big night with your favourite Djs. There are seven major Ibiza clubs.

Besides, there are many smaller venues such as Bora Bora, Boho, Blu, Grial, Marina…

Clubbers have a multichoice of parties to go from Monday to Sunday with diferent music from night to night. You can see Ibiza Parties for descriptions of each night.

F*** Me I’m Famous at Pacha Ibiza, the french superstar David Guetta causes gridlock inside and outside Pacha every Thursday, this season other artist will join the club as Nicky Romero, Diplo, Zedd, Arty and Daddy’s Groove between others.

Carl Cox at Space, celebrating this year his 12th year in collaboration with the club, presents now “12 Nights Of Revolution – The party Unites”, opening on 9th July and closing on 24th September, has gained a lot of followers and welcomed other guests as well.

Coocon at Amnesia, don’t miss this party on Mondays, this season comes back with some supporters like Ricardo Villalobos, Loco Dice, Dubfire and Richie Hawting.

Avicii, Sunday at Ushuaïa with the young Swedish DJ, producer of “Silhouttes”, “Levels” or “Street Dancer”pumps out your favourite songs from 07th of July to 1st September.

Judgement Sundays at Eden, it’s San Antonio’s busiest party by a distance, join The Judge at one of the top parties in Ibiza.

If you cannot wait to go to ibiza book you hotel in ibiza here!