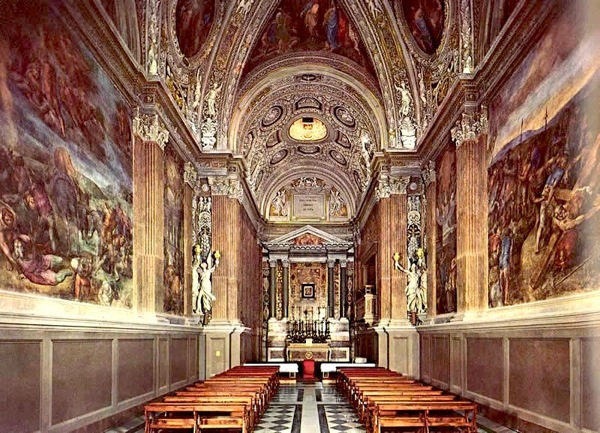 If there is one place in the world that could be associated with secret and hide, that’s the Vatican City. • Vatican City Secret Archives: The Vatican City Secrets Archives owes much of its fame to that “secretum” (called fact Archivium Secretum Vaticanum) that actually in Medieval Latin means “personal”, not “secret”. It was born as a personal archive of the pope. Today it contains over a thousand years of documents in eighty kilometers of shelving. The first pope to allow visitors to come in was Pope Leo XIII in 1881. Visitors now are free to examine the correspondences of every pope for the past 1,000 years, although there is one catch: Guests have to know exactly what they’re looking for. With 52 miles of shelves in the archives, the librarians prohibit browsing.

• Inaccessible chapel: For a long time this was the best kept of Vatican City Secrets. This Chapel remained accessible only to the Popes and a few other privileged. It is the Holy of Holies in the Lateran Palace in San Giovanni in Rome. Only the Pope can celebrate mass. The Latin inscription (non est in toto sanctior orbelocus) means “does not exist in the world most holy place.” Today you can see through a grate on top of the Scala Santa. Reflects the spirit of the Holy of Holies in the Temple in Jerusalem that was destroyed in 70 AD, where he could access only the high priest. • Secret passage: The “Passetto di Borgo” is about 800 meters long and had a protected and secret walkway that the Pope could use to take refuge in Castel Sant’Angelo. It was Pope Nicholas III in 1277 to give that use to the walls built by Leo IV. In May 1527 during the sack of Rome, Pope Clement VI used it, getting out of a blow to the mercenaries who pursued him. This ‘romance’ passage has given rise to myths and legends. The american writer Dan Brown have set there a scene from his other best seller Angels and Demons. • Satanic rituals in the Paolina Chapel: The Pauline Chapel is the Pope’s private chapel, located within a short distance from his private rooms. For this reason it is not open to the public, unlike the nearby and famous Sistine Chapel. It is this secrecy has generated some conspiracy theories. According to an improbable theory, based on the statements – without evidence – released by Malachi Martin, an Irish Catholic priest before he died, in the early sixties was celebrated in the chapel a satanic ritual.

• Opus Dei headquarters: Villa Tevere in Rome is the headquarters of Opus Dei. The Catholic organization was founded in Spain in 1928. It is dedicated to the devotion and helps members to seek holiness. The strong self-discipline and some aspects of privacy have made it the star of many plots and conspiracy theories, also in the fiction, such as in the Da Vinci Code, the famous best seller of Dan Brown.

• Order of Malta headquarters: The Order of Malta is one of the older religious orders and therefore involved in several historical cases become famous. The Magistral Palace, the world headquarters of the order, is in Via dei Condotti, one of the most centric and famous shopping streets in Rome. • Withdraw cash: The Vatican Bank is the only bank in the world that allows ATM users to select Latin to perform transactions. That’s just one symbol of the Holy See’s continued devotion to the language. Pope Benedict XVI has been particularly passionate about reviving the language and purportedly holds many informal conversations in Latin. (Pope John Paul II generally spoke Polish.)