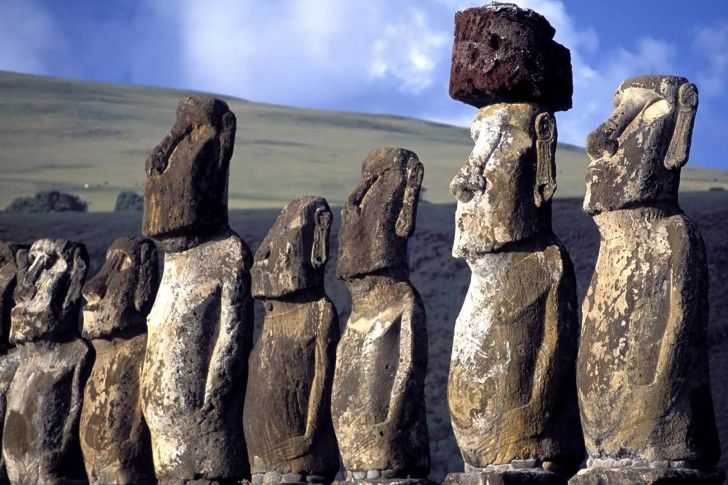 Easter Island, called Rapa Nui by locals, is a triangular shaped island of just 2,000 inhabitants, located 2300 miles (3700 km) away from the coast of Chile and 1100 miles (1770 km) away from the nearest inhabited island. Rapa Nui is a very isolated place with a singular environment. It’s commonly thought Rapa Nui have been settled by a group of Polynesians who have populated the island reaching it on a wooden canoe. But the real attraction of this island is the Moai: huge statues representing human faces. The statues are from 100 to 400 inches high (2.5 to 10 meters) but there is one of almost 1000 high (25 meters)! The Moai are monolithic stones of volcanic tuff which weight around 10 to 25 tons and are located all around the perimeter of the Easter Island. It ‘ a fascinating island with a veil of mystery: the story of the Moai is not totally clear. Easter Island’s mysterious Moai testify the achievements of their creators: the effort to create these monuments and move them around the island must have been great. However, no one knows exactly why the Rapa Nui people undertook such a task. The island seems to have been abandoned brusquely: in the quarries located in the nearby of the volcano that dominates the island were found about 400 Moai uncompleted. Local legends also tell that after the death of the clan leaders statues have absorbed the supernatural powers of the deaths. It is generally thought that the Rapa Nui’s civilisation demise resulted from an environmental catastrophe caused by them. How to get to Easter Island

It’s almost a miracle that Polynesian people succeed in getting to Easter Island just with a wood canoe. To get to Rapa Nui you should firstly reach Santiago de Chile or Thaiti, and from there you can fly to Easter Island with a 5-hour flight with Lan Chile.
When to visit Easter Island
High season for tourism in Easter Island is summer, which in this hemisphere is from January to March. However, the temperatures are good all the year round, going from 55ºF (13ºC) to 79ºF (26ºC). To find less crowds you can visit Easter Island during low season.

Where to stay in Easter Island

Where to eat in Easter Island

Most of the restaurants are located in the Mani street of Hanga Roa, the main city of the island. The variety of food on the island is limited, due to the isolation, but you can find a wide variety of fish and seafood. Local traditional food is well represented by Curanto and Tunu Ahi, both fish based dishes.

What to see in Easter Island